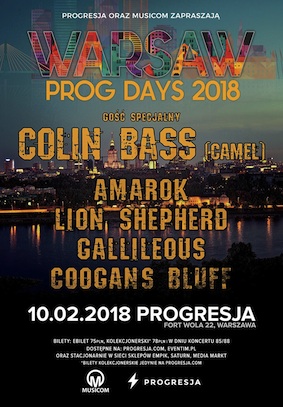 February in Poland. Minus temperatures day and night. The sky is a huge grey slab of stone. From the window of my hotel room I watch the snow falling. On the other side of a six-lane urban freeway I can see the fresh ghost of a failed shopping mall, full of emptiness, teeming with desolation. In the distance, between that glowering monument to misjudgement and the lonely bus station, hulks a large square building, once a factory, now proudly displaying the words 'Progresja Music Zone', writ very large on the outside. What am I doing here?


I'd just arrived in this suburban Warsaw wasteland to take part in the Warsaw Prog Days Festival, due to take place in the aforementioned 'Progresja' establishment in a couple of days time.
I was initially asked by my friend Michal Wojtas, the gifted guitarist and composer of the Amarok Music Project, to pop up and sing on the track I'd recorded with him on the latest Amarok album, 'Hunt'. Then it was suggested I could play my own set too as 'special guest'. I said 'Fab' and next thing my name was on the top of the bill, which was fine I suppose. There were just the small details of what I was going to play and who was going to play with me and whether it was going to be at all possible given that I would only have time for minimal rehearsals. But the admirable Amarok told me not to worry, they would prepare whatever songs I suggested and I could just join them for a couple of days rehearsal before the concert. And indeed they did all that and exceedingly well too, in spite of a last-minute departure of a keyboard player (for personal reasons, I was assured, not because he had to play my songs). Fortunately, the last-minute replacement keyboard player turned out to be Maciej Caputa, who is actually a well-known drummer as well as an excellent keyboardist who worked exceptionally hard not only learning all of Amarok's set but also my stuff too. Chapeau!

And more chapeaus (or chapeaux) for the splendid Amarok ensemble, namely: multi-instrumentalist Konrad Pajek (with whom I could swap acoustic guitar and bass playing roles), percussionista Marta Wojtas, drummer Pawel Kowalski and Michal Wojtas on guitars and guiding spirit.


And in the last but not least department: I also invited my friend Maciej Meller to come and join in. Maciej played on my 'An Outcast of the Islands' album way back in 1998, alongside his colleagues in the Quidam band. These days he plays with leading Polish progsters, the mighty Riverside. Luckily he had time to travel to Warsaw and delight us all with his prowess.


'Twas a great line-up and we all had a very nice time. I was pleased to play some songs live for the first time, such as Walking to Santiago and Nowhere to Run and they seemed to work very well. I enjoyed it anyway. Hope to be able to do it again sometime.

Also, much respect to the three other bands who appeared and were all exceedingly good in very different ways: Galileous, Here On Earth and Coogan's Bluff. Nice to meet all.


And it's Good Night from us! l-r: Pawel Kowalski, Marta Wojtas, Konrad Pajek, myself, Maciej Meller, Michal Wojtas, Maciej Caputa and the entire Progresja audience. Thank You!
Big thanks due also to Progresja chief Marek Laskowski and Beate Reizler at Musicom and all the crew. Until the next time!