...or What Ever Happened to my Blog?

Having left my reader(s) hanging off a cliff whilst trundling back to the UK on the rock'n'roll bus, I then proceeded to do nothing in the way of a Blog post up until now. Irresponsible I know but life is what happens when you're busy not writing about it, after all. My apologies to anyone who missed me. I love you too.

Anyway, I awoke early at the end of the gargantuan drive across Europe and stumbled out of the bus to find myself at the place they call The Junction in Cambridge. I wandered in backstage and spent some time contemplating the instructions in the shower.

There were just four more shows on the Camel summer tour, culminating in our appearance challenging The Scorpions in a loudness contest (they won) at the Ramblin' Man Fair. In-between our numbers we were hoping we'd get a chance to whistle along with 'Wind of Change' or something like that. But as it happens the schedule was tight and we had to cut our set to accommodate the local authorities, so we kept up the pace. Was all much fun and it was lovely to see the lovely audience and a great big lovely moon in the sky.


And then it was a bit of convivial celebrating in the pleasant backstage glade before our band of merry travellers began to go their separate ways. Goodbyes were said, hugs were exchanged and undying fealty to each other was sworn. Some were whisked off to airports, others set off to their homes and families until the rock'n'roll bus finally pulled out of the festival site in the early hours with a reduced mannschaft of myself, Andrew, Steve the merchman, dear soundman Bunny and just as dear (but worth every penny) back-line tech supremo, Del. We were heading back to the place from where we started to know it for the umpteenth time (apologies to T S Eliot), namely, Real World Studios, where Del had left his magic van and I was going to get a lift home and this last small company of the road would finally be parted...until the next time.

I'll finish with a couple of random snaps from the road.

and then there was the night on the bus when Denis got out his excellent collection of false moustaches. 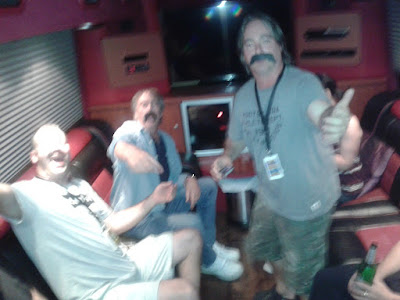 I'll leave you with a portrait of Wing Commander Derek 'Where Del?' Haggar, TCP and Mars Bar. 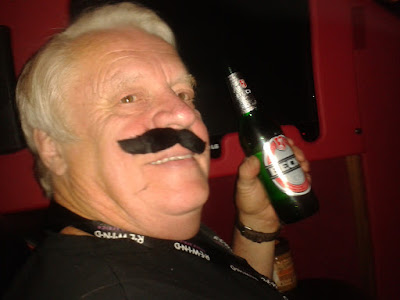