Saturday 26th October,  Amsterdam: the Rabozaal is part of the new complex built between the old Melkweg and the Shouwburg concert hall. I remember the old Melkweg. First time I played there was circa 1974. Opposite the stage was a large raised platform covered with old Oriental rugs where music lovers would lie and smoke joints while you played. Things were more relaxed then.

Saturday night, the Rabozaal was packed solid with the first standing audience of the tour. It does


make for a different atmosphere from a seated concert hall – or indeed the old reclining pot-heads of yore. Anyway, once again we thoroughly enjoyed ourselves. I had a bit of a cold and was worried about my voice but managed to get through it – a little croaky but no major disasters.

Then back on the bus for an overnight journey to London, via the Calais-Dover ferry. Getting out of the tiny street outside the Melkweg took some expert manoeuvering by our driver, Craig - aided by a team of our crew and some Melkweg guys clearing a path through Saturday night revellers and hundreds of bicycles chained to railings and hindered by some unhelpfully belligerent idiots, including a charming couple who threw a bottle of water at Craig while informing him they wanted to punch him in the head and inferring he had improper relations with his mother. Not like the old hippie days, for sure. I blame the internet.

Some way down the motorway one of the inside tyres blew and so we had to pull over and wait a couple of hours for the emergency services. All these delays were worrying as we were keen to get on a ferry across the Channel before the advertised Severe Storm arrived. After all there was a hotel and a day off in London waiting for us. Not only that, if the storm was bad enough to stop the ferries (it was), we were in danger of missing the Barbican show altogether. As it was, all was ok. We came, we did it and it was a jolly good show, I think. Was lovely to catch up with my daughter Lenya who flew over from Berlin. She took this photo of the soundcheck above. And here we are backstage:

Unfortunately a strict stage curfew policy at the Barbican meant we had to cut a couple of songs from the set and vacate the premises earlier than we would have liked or incur a large bill for overtime. So no time to do any meeting and greeting, unfortunately. 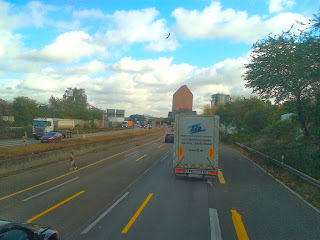 And we were off again, overnight on the bus to Bochum, Germany via a 3 am full English breakfast on a practically empty ferry. Pleasant night off in a hotel last night. Tonight we play in church.